Eight of the UK’s 10 industry groups saw export growth between 2015 and 2017 according to the latest data released by HMRC.

The data, compiled from the Overseas Trade Statistics and Office for National Statistics, found that 151,000 UK firms exported goods and employing some 9.7m staff. 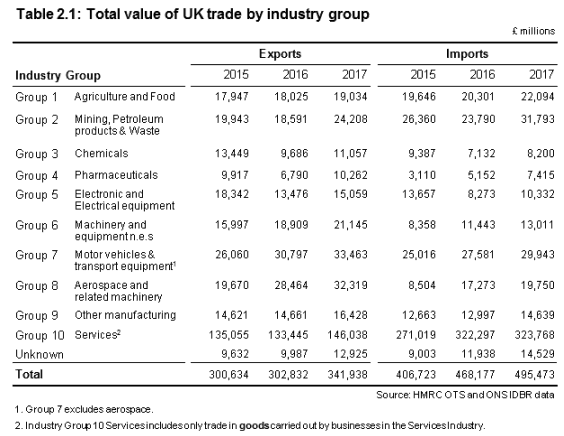 Each and every industry group saw more short-term growth between 2016 / 17.

Business strength in the face of Brexit

This latest data set from HMRC makes for an interesting read, and a positive one too.

Firstly, whilst some sectors including most notably chemicals and electronics saw marked declines between 2015/16, every sector experienced growth thereafter. That’s despite the EU referendum result in late June of 2016 and ongoing uncertainty and negotiations the year after.

Stalwarts of UK industry including aerospace, pharmaceuticals and vehicles continued to see growth – a positive sign before the UK officially leaves the EU in March next year.

Overall, the total value of exports saw an extremely healthy 13.7% growth, highlighting both the ambition, confidence and success of exporting UK firms throughout the Brexit process.

And despite one in 10 UK SMEs now exporting around the world, 72% of the total value of exported goods is generated by a smaller percentage of more experienced firms over 20-years-old.

This data, combined with other further data released recently as part of the Annual Business Survey, shed a positive light on the UK’s international trade and the increasingly international outlook for SMEs and start-ups too.